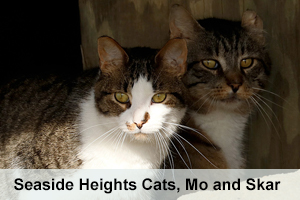 UPDATE: Thank you to everyone who took action to protect cats in Seaside Heights. Unfortunately, Ordinance 2016-11 was passed. Read our response to the ordinance.

Despite Mayor Tony Vaz of Seaside Height’s claiming that he has the best interest of cats in mind, he is now promoting an ordinance that would result in the establishment of a deeply flawed TNR program and endanger hundreds of community cats. The ordinance would force caregivers to fulfill unreasonable requirements, which discourage citizens from caring for cats and practicing TNR. The ordinance  even states that they recognize “some feral cats and stray cats will eventually be trapped and humanely euthanized.”

Alley Cat Allies has been in talks with the mayor, who has said he doesn’t intend to allow any community cats to be killed in Seaside Heights and that the cats are his priority. This ordinance is a step backward for Seaside Heights and flies in the face of the conversations we have had.

Tell Seaside Heights officials to oppose the ordinance as drafted and make revisions that achieve the best results for the cats and the citizens of Seaside Heights.